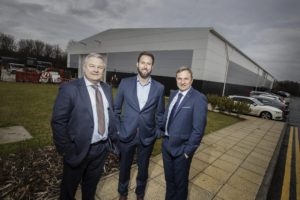 The final unit at a speculative development on Tyneside has been let, a little over a year since the project completed.

Infinity Park in South Tyneside is now full after a 10-year deal was secured by HTA Real Estate, which will see Spanish-owned utility contracting firm IQA Elecnor move onto the estate.

The £5m scheme at Monkton Business Park in Hebburn was developed by Washington-based Hellens Group, and comprises three high-specification industrial units which are now occupied by a variety of businesses following deals brokered by joint agents HTA Real Estate and Avison Young.

IQA Group, which employs 20 staff in the local area, has agreed an annual rent in the region of £100,000 for its new premises which incorporate a two-storey office space.

Craig Roberts, Business Development Director at IQA Elecnor, said the premises will become the firm’s regional headquarters, where it plans to grow its headcount to a minimum of 300 over the next five years.

He added: “IQA Elecnor has recently been awarded a major contract in Newcastle providing high spec fibre-in-the-loop, or FTTH networks. Following this, the new premises were selected due to their location, less than five miles from Newcastle city and close to both the A19 and the A1M.

“Infinity Park provides excellent access throughout the North East and this move shows we’re seriously investing in the area. This is now our fifth UK site as we expand our company and brand across the country, and we’ll be looking to work over a number of sectors in the market place as we grow.”

Russell Taylor, director at HTA Real Estate said: “For this speculative development to be fully let so quickly after its completion is a fantastic achievement, demonstrating the demand for projects like this in the North East. We’re pleased to have played a part in the success of the scheme”.

Gavin Cordwell-Smith, chief executive at Hellens Group, added: “We are delighted to welcome IQA Elecnor as our final tenants at Infinity Park and to conclude what has been a very successful speculative development project, thanks to the support and expertise of our agents HTA Real Estate and Avison Young.

“We are now focussing our attention on a number of new development schemes across the region and look forward to making further announcements in the coming months”.