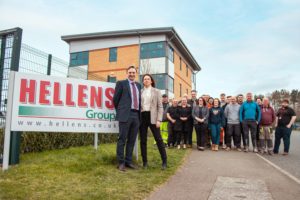 Gavin Cordwell-Smith and Kate Hellens with the team at Hellens Group.

Hellens Group, the North East-based property and construction firm, is gearing up to celebrate its 50th anniversary in 2023, announcing an ambitious target to raise £50,000 for The Percy Hedley Foundation. The company, which has offices in Washington and Stockton, and a factory in Catterick was founded in 1973 by John Hellens. The original business has expanded considerably over the years, into markets including social housing, land and property development, including urban regeneration, as well as the production of hard landscaping materials at its Oakdale facility.

Hellens Group’s flagship project, Burtree Garden Village in Darlington, will deliver 2,000 new homes and 200,000 sq m of employment space as part of a new proposed sustainable community. A planning application is due to be submitted later this year for the first phase of the project in conjunction with Homes England.

Throughout the next twelve months in the lead up to its 50th birthday, the team at Hellens Group will be working on a series of fundraising activities with a view to hitting or exceeding its target by the time of its official anniversary. These will include ladies’ luncheons; golf days and a gala ball.

The Percy Hedley Foundation, which was set up in 1953, helps more than 650 people each year to reach their full potential, live the life they want, and be happy by providing top quality care, education and lifelong learning opportunities. The charity employs more than 1000 members of staff, including teachers, special support assistants, therapists and educators who work together to empower and supports people with cerebral palsy, communication impairments, sensory impairments, complex learning, social care and therapeutic needs. The charity relies on money from donations and fundraising events to deliver services and new experiences, improve facilities and upgrade equipment.

Kate Hellens, managing director of Hellens Residential, and John Hellens’ daughter, said: “We are enormously excited to be approaching our 50th anniversary. And what better way to celebrate than by setting ourselves a stretching target of raising £50,000 to support the invaluable work of The Percy Hedley Foundation.

“We have already kicked off our fundraising, and we hope the amazing North East business community and our development partners will all get stuck in over the next twelve months.”

John Knight, chief executive at The Percy Hedley Foundation said “We are delighted that our fantastic supporters Hellens Residential have chosen to fundraise for us during this special anniversary year, both for them and for us as we approach our 70th anniversary. After a very difficult two years which have had a significant impact on our ability to raise vital funds, the money raised will make a huge difference to the children and young people we support.”