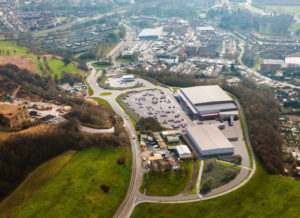 The development will include a Tesco supermarket, which is expected to create around 80 jobs and will cover a footprint of 4,200sqm. Customers will be able to make use of electric vehicle charging points and recycling facilities in a 330-space car park. Tesco will also provide a petrol filling station on the site.

In addition to Tesco, popular discount brand, Home Bargains, will also open a 1,900sqm store on the site. In total, the two sites are expected to create around 100 new jobs.

Sunderland City Council’s cabinet agreed to sell the former colliery – which had been empty for 40 years – to Hellens Group and Fintry Estates in 2019.

As well as plans for the retail park, proposals for a permanent sculpture that will pay homage to the area’s mining heritage were revealed earlier this year. Ray Lonsdale, the artist behind Seaham’s famous ‘Tommy’ – who has also been commissioned by the council to deliver three new pieces for Riverside Sunderland in the city centre – will create the installation.

Gavin Cordwell-Smith, chief executive of Hellens Group, said: “We are delighted to have received the Planning and Highways Committee’s seal of approval for this development which we strongly believe will contribute positively to Houghton Colliery in creating an attractive retail hub and generating employment opportunities for local people.

“As a Sunderland-based company, we are committed to supporting beneficial local community regeneration. We look forward to starting work on site early in 2022.”

Cllr Kevin Johnston, portfolio holder for Dynamic City at Sunderland City Council, said: “This is great news for Houghton – for businesses that will see a boost due to the increased footfall the new development will bring – and for local people, with new jobs created and indeed an improved retail offer for residents to enjoy. We have pushed for a development like this in Houghton for some time, and to see this given the green light is a massive boost for the town.”